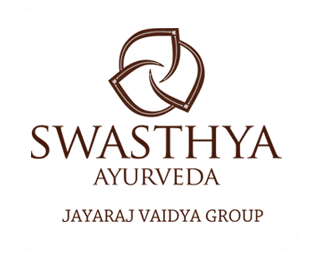 Swasthya Ayurveda Medical and Wellness Clinic located in the heart of Dubai approved by Dubai Health Authority and UAE Ministry of Health is envisaged as a center of healing that adopts a holistic approach through authentic Ayurveda treatments.
Swasthya Ayurveda takes pride to operate the largest Ayurveda outpatient facility in UAE offering premium healthcare services in a serene environment through an experienced and certified team of doctors and therapists with well-equipped and spacious separate male and female treatment rooms.

Jayaraj vaidyar, during his in-depth study of ancient palm leaf manuscripts, found the miraculous effect of Marma treatment in healing body pains especially back and neck pains and migraine. It is an age-old practice in Kalari (a martial art in Kerala) and was practiced effectively Kunnathuvallappil family for generations. Oil therapy is an important component of this treatment where medicated oil is applied to the body in large amounts and to marma points or affected parts and massaged to acquire healing. Marma therapy finds special mention in Ayurvedic texts such as Sushruta Samhita and Vaida Sushruta. Marma in Sanskrit means “hidden”, which is an area where two or more types of tissues such as muscles, bones, ligaments, veins, etc gather. Marma therapy is touching an individual’s right point at a right time for the purpose of healing. It involves the utilization of 108 vulnerable points in one’s body which are considered to be access points to mind, body, and consciousness. It helps to remove blocks in the energy channels and nervous system thereby regaining the normal flow of the nervous system and to experience a dynamic transformation of the body at a physical, mental, emotional, and spiritual level with a positive link with the unconscious mind.